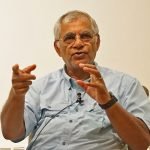 A live conversation between Shugen Arnold, Roshi, abbot of Zen Mountain Monastery, and Buddhist neuroscientist Dr. Phillip Ninan. The two tackle a number of tricky questions where the findings of science, the teachings of the Buddha, and the practice of meditation all intersect to better illuminate one another.

Before his retirement, Dr. Ninan was a Professor of Psychiatry & Behavioral Sciences at Emory University School of Medicine where he also served as Director of the Mood and Anxiety Disorders Program. There, his research focused on the neurobiology and treatment of anxiety and depressive disorders. Later he worked for six years in the pharmaceutical industry as Vice President in Neuroscience at Pfizer.

Born and raised in India, Dr. Ninan received his medical degree from Christian Medical College in the city of Vellore. He then completed his residency training in psychiatry at the Medical University of South Carolina followed by a fellowship at the National Institutes of Health.

Here is a transcript to a TEDx talk Philip delivered in 2018. The talk was called “Mind! Lessons from the Brain.”