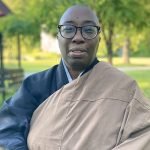 What does renunciation mean in our culture? How does it relate or differ to Western Christian notions of leaving the world? This talk by guest teacher Rev. Chimyo Simone Atkinson exploration of the sameness and difference that underlies lay and monastic paths.

Chimyo Simone Atkinson was ordained a priest in the Soto Zen Buddhist tradition in 2007. She received her monastic training at Great Tree Zen Women’s Temple in North Carolina where she also served for a number of years as Head of Training and received Dharma Transmission in 2015 from Rev. Teijo Munnich.

Rev. Chimyo completed Sotoshu International training periods (Ango) in Japan in 2010 and 2011. She also completed training periods at the Aichi Senmon Nisodo in Nagoya in 2012 and Ryumonji Monastery in Iowa in 2014. She has been serving on the board of the Soto Zen Buddhist Association since 2017 and helped to draft that organization’s standards for formal monastic practice. She is a member of the Association of Soto Zen Buddhists Jukai-e committee and an SZBA liaison to that organization’s Roadmap Committee.

NextCalling Forth the Master Within the Barrier