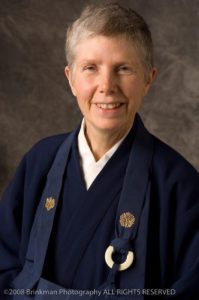 Jan Chozen Bays, Roshi has been the teacher for the Zen Community of Oregon since 1985. In 2002 she helped to found Great Vow Zen Monastery where she is the co-abbot, and in 2011 she also helped found Heart of Wisdom Zen Temple in Portland, Oregon.

Chozen Roshi has studied and practiced Zen Buddhism since 1973. She received Jukai (lay precepts) in 1975 and priest’s ordination in 1979 from Taizan Maezumi, Roshi. From 1978 to 1983 she lived at the Zen Center of Los Angeles, studying with Maezumi Roshi and directing the Zen Center’s non-profit Medical Clinic. She finished formal koan study in 1983 and was given Dharma transmission (authorization to teach) that same year.

An author of many articles about Zen in the periodicals Tricycle and Buddhadharma, her first book, Jizo Bodhisattva, Modern Healing and Traditional Buddhist Practice (Tuttle, 2002), has been re-issued in paperback as Bodhisattva, Guardian of Children, Women and Other Voyagers (Shambhala). She is the author of How to Train a Wild Elephant: And Other Adventures in Mindfulness (Shambhala, 2011), and Mindful Eating: A Guide to Rediscovering a Healthy and Joyful Relationship with Food (Shambala, 2011).

Chozen Roshi is also a pediatrician and world-renowned child abuse consultant, mother and wife, ceramic artist, and lover of marimba.