The National Buddhist Prison Sangha (NBPS) is a nationwide network of Buddhist volunteers. NBPS’s mission is to sustain a correspondence program in Zen Buddhist practice with inmates across the country in prison facility settings. In addition, NBPS also supports and leads Buddhist meditation practice groups in New York State.

NBPS came about in response to a New York State prison inmate’s request to practice Buddhism inside. The Mountains and Rivers Order established the National Buddhist Prison Sangha in 1984, following a court victory on the right to practice religious freedom in prison. NBPS was the first Zen practice group started in New York State correctional facilities. 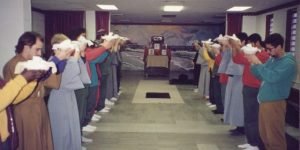 As of 2013, NBPS is now formally the “Right Action” work of Dharma Communications (DC), the Mountains and Rivers Order’s educational and outreach arm. NBPS and DC provide teaching materials and practice supplies, including discounted or free cushions for inmates and sitting groups; ship all packages and letters from their facility; and receive the correspondence that makes up the bulk of the NBPS staff’s work.

If you would like to donate money, books, CDs, malas or cushions to the prison program, contact us at 845.688.7993 or support@dharma.net.